August 12, 2019
AH decided to celebrate hari raya with me and family in KL. i asked him if he has plans to go back to his hometown. but since the off days are short, he decided to be with me during raya aidil adha. despite me being happy coz he will be with me, i am also sad coz i don't know what was joey's plan. AH has been so sweet, and patient with me (for now - i hope he will stay like that even when we are married 😜).

N1 bought many durians on raya eve. so after we are done helping out preparing for raya, i asked AH to open up 1 durian for me. so that night from 1 durian became 3, i think. by around 9pm i was already tired and wanted to go home. actually kan, i don't know how to write about this posting. see, cakap/tulis pun macam dah tunggang terbalik. 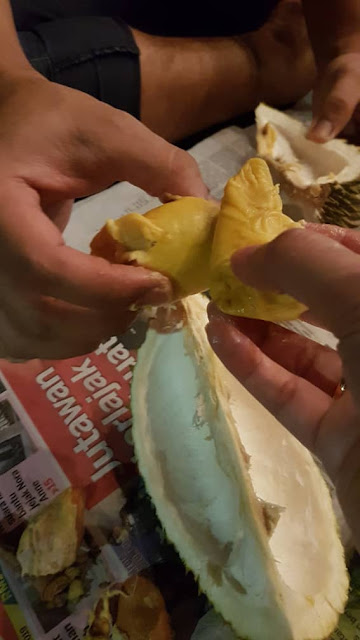 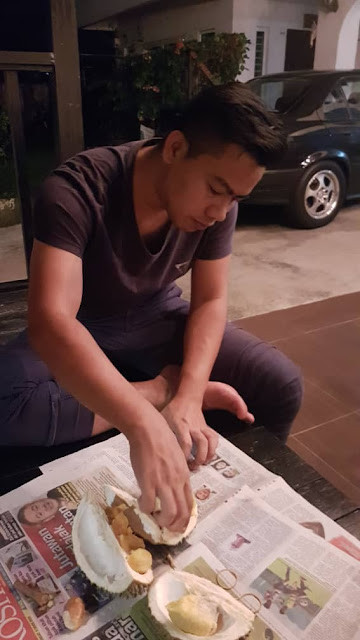 dah lepas makan durian tu memang aku nak balik dah.. and i was also chatting with lisa at the same time. lisa was asking me if i am going home straight soon, i told her i was. but she asked me to stay a bit since joey is on the way home already. and so i agreed.

until it was already like almost 10.30pm. joey sent a message in the kalam clans' chat group.
and no one in kalams clan responded to those statements. i waited till joey open the car's door coz i wanted to hear how many people getting out of the car. ehh betul lah, 2 orang keluar kereta.. and seterusnya, i don't know how to cerita here. or maybe sebab it happened 2 weeks ago, dah tak semangat nak cerita dah. ok ok.. i back dated this posting. 😜 in summary, lisa made a surprise to come back for raya haji!! yey! when i get the video from my kids, i will add up to this posting. 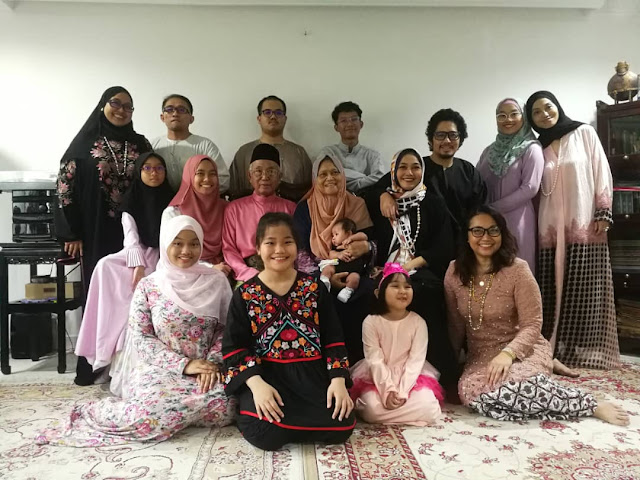 Popular posts from this blog

January 30, 2018
it started when i got the advertisement on my newsfeed. memang dah lama teringin nak makan shellout ni tapi kalau nak pergi kat Enjoys Desa Melawati sure kena beratur. and dari lapar nanti jadi kenyang and lapar balik. so, i decided to ajak my zumba sisters if they wanna try this new place found called Shellambak. and of course i bring my prince along although he was upset for awhile when he knew my zumba sisters are coming. i dont know why lah. sedangkan dia pun ajak kawan dia. aparaa..
and so, yeahh i also saw the short video clip about this Shelllambak.. sila cari di fb ye.
date of visit: 27 Jan 2018
location: Hang Out, Bukit Antarabangsa. [Cabin Style next to Petronas Gas Station] Tel: 0183636726
place & decor: simple and nice ~ relaxing for lepak. it's like food truck environment but better seats, but perhaps not wheelchair friendly so much due to the steep way up.
cleanliness: 9 out of 10. [for the whole area]
restaurant service: friendly chef, reasonable waiting time.
…
Post a Comment
Read more

May 15, 2019
today marks the 10 day i am being warded at the hospital. i don't know if this has got anything to do with my incident back in maldives in january but what i know i have vulnerable lungs at this point of time. although i tried so hard not to get myself sick, somehow the environment is not helping people like me. or was it work stress? or too much thinking of what is next life has for me? i know for sure it is somewhat about AH. hmmm too much on that. i should deviate my focus on other things - things that we/i are more certain and i can control of.
i should just get back on track on getting really healthy. really try to do something else to distract my frustration on not having be able to do the usual exercise that uses my strength so much. so, right now, definitely no weight training, no full zumba teaching, no swimming hmm what is left? yoga?? i really need to get the time with maria.
as i am writing this now, i just had my minor procedure to jab steroid on my right ribs for…
7 comments
Read more

March 21, 2019
what is with 28th of the month? this morning on March 3rd, 2019 when i woke up, i realized something scary. i was admitted 'again' to the hospital on 28 Feb 2019, just 1 month after i was admitted at the hospital in Maldives on 28 Jan 2019. yes, twice in 2 months and on the same date? what a coincidence.  how do i start? it happened on the 2nd day of my dive trip, and on the 2nd dive. it was just like any other dives. i wanted to have a separate posting on this incident in maldives. but as the time goes by, i get quite tired of irresponsible people who spread stories about my condition after the incident. 28 Jan 2019: happened on the 3rd day in maldives and 2nd dive for the day. 2nd dive site was at Miyaru Kandu, one of the most famous dive spots close to Alimatha Village in Felidhoo Atoll, Maldives, a great place where you can observe big pelagic fish. In fact “Miyaru” is the Dhihevi name for “shark”, so it is of no surprise that Miyaru Kandu is a great dive spot for catchin…
Post a Comment
Read more